Every day we see signs telling us what to do: stop, slow down, keep out, watch for children. Sometimes we heed the warning signs, sometimes we don’t. In my field of child sexual abuse, I’ve found that there are so many signs and few people paying attention to them.

Recently, I had an acquaintance friend “Jane” tell me that she had a story to share with me. Jane had been close to her friend “Jackie” for years and had known Jackie’s daughter “Judy” since she was a baby, often taking care of her and keeping her for playdates with her own son. Judy’s parents were no longer in a relationship together and shared custody. When Judy was 3½ years old, Judy started exhibiting unusual behaviors and warning signs.

After this last incident, my friend Jane said she got a weird feeling. I call it that “Uh-Oh” feeling in my Camp Careful classes. Jane said she had just recently been to my Camp Careful class with her son and she said, “Soo, everything went off in me. I just remembered all the things you had said in class.” She struggled with whether or not to tell her close friend, but finally Jane decided to tell Jackie that she was suspicious something might be going on. Jackie was naturally upset with these allegations and actually stopped speaking to Jane for a while. A few months later, Jane got a call from Jackie who said Judy had made an outcry that her Daddy was sexually abusing her. Wow. Jane just changed the course of that little girl’s life. All because she paid attention to the signs.

At first glance, each of these little situations don’t seem to amount to much. If you put them together, look at the whole picture, and notice changes in a child’s behavior, the signs can show you something more.

What are some of the signs a child may be sexually abused? 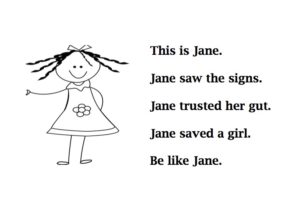 If you see any patterns of behavior or physical signs in a child and if you get that “Uh-oh” feeling, YOU MUST ACT! Do not wait to see what happens. Do not try to figure it out. Do not assume everything is fine. Do not worry about hurting your friend’s feelings. Do not think you’re over-reacting. Report any suspicion of abuse to CPS and Law Enforcement immediately. You could change the course of a child’s life! Trust your gut and BE LIKE JANE.

Thank you, and as always, empower your kids and stay safe!

“Jane” gave me permission to share this story. “Jackie” and “Judy” live in a different city and are getting the help they need.

Disclaimer: The information contained on this website/blog is for informational purposes only and should not be used to replace the relationship that exists between you and your pediatrician or doctor. Please contact your doctor for medical advice and/or treatment recommendations specific to your child.

Give to help victims of abuse

In crisis or have an emergency?